For the first time Crown entities are ranked in terms of their reporting. This has prompted several Crown entities to ask the Commission how they might improve their future ranking.

This year the Commission will update its good employer information based on responses from Crown entities and in light of changes to the economic, political and social environment, advances in EEO and management practices, and changes in employment law. The number of Māori employed by Crown entities is too low, according to the latest annual monitoring report released by the Human Rights Commission. When Crown entities were asked to identify the number of Māori they employed, results showed only 6.36 per cent of Crown entity employees are Māori. The Commission’s report also showed close to a quarter of respondents had no Māori staff, and only two chief executives and very few senior management roles were Māori.

Crown entities reflect the general pattern of low numbers of Māori in management in the public sector generally.

Breaking through – Young people at work

Youth employment is a critical issue in New Zealand and the latest OECD figures show that youth jobless rates have risen to 19.4%, the highest in 20 years. As part of its role in delivering good employer guidance to Crown entities, the New Zealand Human Rights Commission is encouraging their employment of young people.

Breaking through – Young people at work advocates for the hiring and retention of young people to help economic recovery, improve productivity and as an vital national resource in themselves. It follows the work the Commission undertook in its major employment enquiry, the National Conversation about Work, conducted recently amongst 3000 employers, employees, community groups and people seeking work across New Zealand’s 16 regions.

The Commission’s annual scrutiny of how Crown Entities are reporting on their good employer obligations shows a lack of visibility given to pay equity despite a significant gender pay gap in the health sector.

The 21 DHBs, who employ around 80 per cent women, undertook pay and employment equity reviews and developed response plans with staff from January 2007 to April 2008. One DHB reported a pay gap of 31 percent on fulltime equivalent earnings.

Five undertook full reviews and 16 were involved in a verification process. However, the Commission has found no DHB reported ongoing work in relation to response plans in their last annual reports. Only half made reference to having an equitable transparent and gender neutral remuneration system.

“It is disappointing to see a slowdown in commitment to closing the gender pay gap in the health sector. We hope staff and managers will find the monitoring tool useful to pick up the pace”.

The Commission has urged the Government to set a minimum target of halving the gender pay gap by 2012 and eliminating it by 2020.

The Human Rights Commission’s monitoring of Crown entities to see how well they are doing as good employers and in reporting equal employment opportunities has shown that many have responded positively to the challenge – but has also revealed gaps in some areas.

Crown entities are required by law to be good employers and promote equal employment opportunities. The EEO Commissioner is required to report on their progress and this year sees the second review of Crown entities’ annual reports.

“We only benchmarked what agencies reported in their annual reports”, says EEO Commissioner Judy McGregor. “Sometimes reports differ from reality, so while this can’t be used as a sole indication of how well agencies are doing as good employers, it does give a good signal of how strongly they keep equal employment opportunities in mind.”

While almost all of the Crown entities that employ staff had referred to being a good employer or EEO somewhere in their annual report the Commission is heartened to see that the number of Crown entities that covered all seven elements in detail has doubled compared to last year.

This year the Commission asked Crown entities to provide information on flexible work practices, to check progress on the growing demand from employees for flexible work arrangements and following the passing of the Employment Relations (Flexible Work Arrangement) Amendment Act 2007.

The information received suggests that many Crown entities are going beyond what the law requires of them, and are trying hard to help staff with working more flexibly, which is great to see.

While some of the EEO elements (employee development, health and safety and recruitment, selection and induction) were reported by many of the Crown entities, others were less reported. Harassment and bullying prevention came in lowest, as it did last year, followed closely by reporting of remuneration, recognition and conditions.

There was a slight increase compared to last year in the reporting of EEO groups, especially those relating to age and Pacific peoples. Workplace profiles were more comprehensive than last year, with some including profiles by management and/or occupational groups.

The Commission would like to see more of that next year, so Crown entities can better identify women, Maori, people with disabilities, ethnic or minority groups, and older people within their workforce.

“We were disappointed to see that, just like last year most Crown entities didn’t report that they had profiled EEO target groups in their organisation”, says Judy McGregor. “And when they did, only 6% looked at disability within their organisation. That really needs to improve.”

At the same time, she says, there were some clear examples of good EEO practice amongst Crown entities and the Commission has highlighted these in its report. “If this were a report card of all Crown entities as good employers, I’d give them an overall grade of B+ for EEO, with some deserving an A and others a D”, says Judy.

A new Quick Guide to being a Good Employer has been produced by the Human Rights Commission. It is specifically aimed to help local government and the private sector. It covers the seven key elements that organisations should concentrate on to become a good employer and promotes the free online reporting tool to help employers profile their workforces and look to the future for workforce planning. 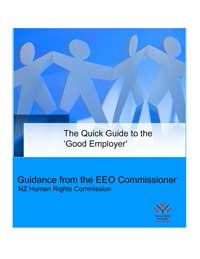 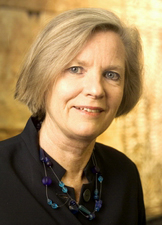 A new, free tool to help employers profile their workforce is now available on-line from the Human Rights Commission.

“This is a fantastic, on-line initiative that will enable employers to see who they employ and look at things like the age of their workforce, the number of women, and the diversity of their employees and managers,” says EEO Commissioner Dr Judy McGregor.

“It also allows organisations to report on and assess their EEO initiatives and should make it easier to tell staff what is happening in their organisation.”

“The tool has a unique Star Graph function which shows organisation how well they are doing in being good employers, based on their own self assessments.”

The on-line reporting tool, developed specifically to allow Crown entities report more easily on good employer obligations, is available to any public or private sector organisation. The reports and information generated are confidential to each specific organisation (password protected).

The on-line tool was developed with the help of Dave Stewart of Human Value who is an EEO Trust Board member and has received excellent feedback from organisations who have trialled the good employer on-line reporting tool.

Sue Stokes, Support services Manager of ERMA New Zealand says, “the tool will be of great assistance to us with out accountability documents and as a guide to our overall efforts to be a good employer.”

To access the on-line reporting tool go to http://live.isitesoftware.co.nz/neon2012/adviceandguidance/reportingtool/ First time users need to click on the Not registered, click here to register and add you own user name and password. You will also be asked to provide details of your organisation. Some of this information, including the organisation name, will be used when reports are generated.